A Case of Consumption Apparently it is time for my the every-coupla-months update on what I'm filling my head with. Lots of artsy-fartsy photos to decorate the place with too, and there should be more of those as the land comes alive once again. Let the historical record show that I (The Zambonis) won my hockey pool this year: 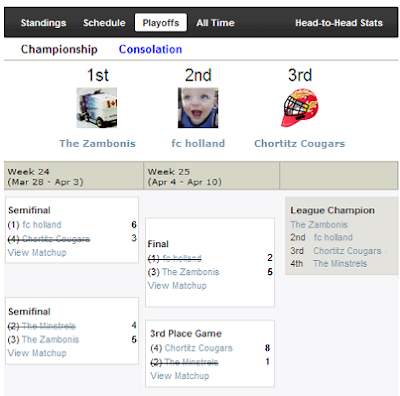 Members of the Jerry's Gulf clan in Rosenort have been running this pool for years. It's been a fun crew, with some historical connections and decent rivalries. I joined up three years ago for the first time and finished a respectable 4th after taking half the season to figure out how to make weekly roster changes (I think Myron won that year as an absentee manager). Last year I had a pretty good team and ended up second to runaway winner and eldest Jerry's-Gulf-son Jason.

Now, a quick note about the whole hockey pool thing. It's a dumb game, requiring you to care about irrelevant games like Atlanta vs Florida because you have a useless defenseman playing on one of the teams. I found myself cheering for the Black Hawks and Sharks this year because I had loaded up on players from those teams, even though I would traditionally dislike them strongly. It's my guilty pleasure, and I was fairly addicted to our head-to-head league, meaning that each team faced off against another team each week, competing for points in the usual categories (goals, assists, +/-, etc).

Plett (fc holland above) was in the lead the entire season -- he drafted well, made some smart moves and utterly dominated. I nearly caught up in the last two weeks, having made some decent (umm...lucky) moves of my own, and my goalies (Thomas, Rinne, Niemi) were tops in the league over the last half. Eventual Art Ross Trophy winner Daniel Sedin drove my offense all year, with Marleau, Kane, and Hossa picking things up down the stretch. I got good production out of Lidstrom before trading him for Weber, who scored like a forward mid-season before tailing off. Pronger and Green never did much for me.

Plett and I were in the final matchup this week to determine the winner. It started slow, and I led the week until Saturday, when Plett turned it around and started leading. When I left to go for a bike ride yesterday afternoon, I was down 5-4, having sewn up three goalie categories, but with only Milan Hedjuk still playing on an impotent Avalanche team, while Plett had a couple of better players still in action. Hedjuk was -4 with zero points and one period left in his fourth game of the week. Plett's main man Byfuglien went -1 (in a different game) to tie us on +/- and then suddenly Hedjuk scored on the powerplay with 30 seconds left (tying us for goals and PPP), sending the game into overtime...then he set up the winning goal with a power play assist that gave me the PPP category by one point.

So Plett's 5-4 lead was transformed into a 5-2 win for me over the course of three minutes of playing time. Four categories tied, and three categories settled by a one point difference. So close. Old friend Greg Siemens pulled into third by beating Warren in the other playoff final. Brent somehow fell to 7th after a strong comeback late in the season. Last year's winner (Jason) fell to 9th, providing a cautionary tale in case I feel too cocky next year. As this was a no-money pool, I have only bragging rights to show for it. Hence this irritating post.
Posted by Jeremy at 10:10 AM No comments: