This is from five years ago, while celebrating Ivy's birthday on the beach in Penticton -- I love her little smile as she eyes her cake and listens to us sing. In retrospect, five-year-old Ivy provided plenty of clues about who she'd be at 10, but of course that's difficult to project into the future. Fun to check out past birthday posts with that in mind: nine, seven, five, and four.

Maybe high expectations come with the territory when you speak and read like someone much older. We often have to remind ourselves that she's not simply a miniature adult, especially when she's emotionally distraught about something we'd never worry about. I know the "gifted" label is problematic, but it shows up repeatedly in the literature on high-achieving kids that many have asynchronous development -- often with academic or creative skills far outstripping their ability to process emotional situations that we think they should be able to handle. That was certainly Ivy at five...and at ten. I love seeing her progress through the tough stuff; even more than seeing her thrive in the pursuits that are easy for her.

She goes through times when we frequently remind her to "take off the black hat", a reference to the critical, skeptical, analytical thinking processes from de Bono's six thinking hats. She comes by it honestly, as I occasionally wonder whether my own black hat is sewn onto my scalp. Perhaps we'll share the blessing/curse of the INTP personality type, prizing our mutual independence, creativity and problem-solving while trying to cope with the prickly traits in the package. I already find myself astounded at her personal creative outlets, leaps and projects, mostly hatched and incubated without any outside assistance -- when she gets an idea, she can be a real force of nature. So now Ivy heads into her 11th year, with plans to keep learning at home -- so far it has not been easy to tempt her to try school again, which is not surprising. She's planned a small (but lavish and high concept) Greek-themed birthday party the week after her official big day. This week we'll celebrate with family, fish 'n chips and a favourite dessert. Last week Ivy finished up her violin season with a summer recital -- it's worth watching the video just to see her come flying in with her fiddle group about 30 seconds in, and then smile...

So we've got an incredible ten-year-old daughter and we're so proud her. What I wrote five years ago still applies perfectly:

"Like all of us, she also has her moments where it's not all good, and we're probably too hard on her sometimes, but overall it's an amazing honour to spend time with this precious creature. Happy Birthday, Ivy Jane."

Marj used to pester me if it had been a while since I had made a blog post full of pictures of the kids. "Enough with the ice and weeds already! Where are your gorgeous children?" Not that those posts were only for her, but she was a big fan of the kids and reminded me often enough...as a result, I haven't had the heart to post them since November. Time to get back on the horse, and of course there's a treasure trove of photos of the kids since then -- I know she would have heartily approved. Many made it into the book I made for the grandparents for Christmas:

Untitled | Make Your Own Book

I wanted to start with Ella, our fascinating seven-year-old. It's hard to get a read on where she's at these days, as it seems like seven is a transitional year for her. Transition to what? We're not sure yet. On one hand she's still silly and fun-loving and carefree, but there's also been a darker, more intense edge to her personality. Not that's it's necessarily negative -- although it can include anxiety and melancholy, it also shows itself in ambition and focus, maybe even enhanced creativity. I've been blown away by her drawing lately. Sometimes she draws out of books, but other times the characters are straight out of her head, and they're often hilarious, like this evil genius shown here. A few more:

It's been great for Ella to get back into gymnastics after a break. She's back to cartwheeling as transportation, and she seems stronger and more confident. She was flying on her skates this winter, and thrived as we switched to riding bikes. It's fun to see her so busy and confident -- will be great to get her back in the lake as things warm up a bit (my first swim is usually in May...this year, late June!).

Socially, it's been harder for her to plug in with friends. She spends a lot of time with her siblings, which is great, but we'll have to get her together with her buddies more often this summer. Oh, and she loves her new room too. A remarkable kid, this one...few more pics:

I tried this back in March, and I like having my own copy of all these little updates from Facebook -- even though they're mostly mundane, they include memory triggers and references I find interesting later. This batch is from about March 20-June 20, 2011, with decorative photos taken from the more recent shots in my Trees set, which I think is coming along quite nicely. Perhaps this is the fate of my blog -- to record my consumption of media five times a year. Better than nothing, I suppose. As usual, decoration provided by some of my recent photos.
Reading Tannis and I don't get to ride our bikes together very often, but my folks took the kids last weekend and sent us out. I got to show Tannis the trail on Conkle Mountain that I've been working on this spring, and the balsamroot was still blooming in the meadows up high. Tannis shot this little video of me in my happy place:
It's good for my soul to get up there, and I've probably put in 20-30 hours with the clippers and hoe. The trail work I've been doing isn't really building as much as it is way-finding, connecting, fixing and marking existing deer paths and old trails, which already cover the mountain. It's been really exciting for me to hook up one good route from top to bottom. With another 10 hours of "work", I think it could be an excellent route, with a challenging 45-minute climb, an incredible ridge-line section with 360-degree views at the top, and some really fun, swooping singletrack through the forests and grasslands on the way down. Tannis's smile is a good sign: Speaking of smiles, the forecast for this weekend has me smiling. We've had so little of this kind of weather so far this spring: 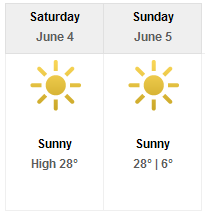