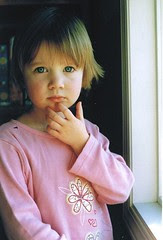 I just love this photo of Ivy. It captures something about her thoughtfulness. More photos from the last couple of weeks:
Posted by Jeremy at 7:07 AM 6 comments:

This afternoon I set out for my usual loop on Rattlesnake Mountain, but continued for another half hour up the nasty climb and made it to the mountain's peak for the first time. Pushing my bike for most of the last parts wasn't much fun, but the ride down was outstanding. From the top, there's a sheer cliff down into Garnett Valley, with sweeping views...the backside of Cartwright Mountain to the west, the lake and Okanagan Mountain Park to the east, Summerland and Giant's Head to the south, and Wildhorse Mountain to the north.

Along the way I got within a couple of hundred metres of the herd of mountain goats (amazing animals) we've been seeing north of town for a few weeks, and followed a herd of 24 deer at one point (do they actually have herds that large?). Laurie, one of the great people I've met in Summerland was up there last week and saw a lot more wildlife -- I'll have to pay closer attention next time.
Posted by Jeremy at 8:30 PM 4 comments: 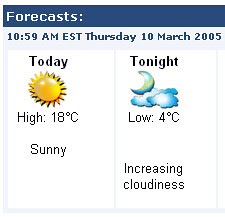 I love these weeks where it's ten degrees warmer than the normal. It felt like we had our sunniest February ever, but it was mostly cool. Now we're starting to imagine that summer is just around the corner.

In Kona Stinky news, Pat at Kelowna Cycle gave me excellent service this week, replacing my entire rear wheel, tuning everything up for spring, and finally getting Marzocchi to fix my fork up properly...all I had to pay was one-way freight to Vancouver ($15) for the whole package. Now to get out there and do some riding...
Posted by Jeremy at 9:13 AM 2 comments:

Someone took a photo from a plane flying right over Penticton that shows both Summerland and Kelowna. Since I have to drive to the office tomorrow, I'm thinking that I should be commuting by boat -- this version shows my house (red star) and my office (yellow star) and the immense distance in between.

In sharp contrast to tomorrow's drive and Dilbert-like existence in an office tower, I spent the most of the first part of today's workday at the local coffee shop and library, where I get way, way more done than I will in the cubicle. As I was walking uptown this morning, I met Myron dropping Elijah off on his way to work and thought how odd (and nice) it is to be living in the same small town with a guy I was in Grade 2 with in another small town 2000 kilometers away.
Posted by Jeremy at 9:48 PM 4 comments: 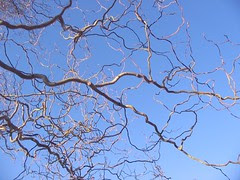 I uploaded some photos last week to Flickr, then forgot to link to them. Mostly photos of the kids, so click in if that's your cup of tea.

We had a sunny picnic at the Ornamental Gardens (which has a surprisingly great site), and I even got to lie down on a bench for a rest. Right in the background of that last photo you can see the top of the mountain we live on poking up. Contrary to the popular east view of the Giant's Head as Summerland's landmark, a closeup of the south view offers a much more convincing stone giant.

Anyway, the girls ran and explored and sat around, generally enjoying the mellow weather we've been having.

Artsy Ivy also drew this fascinating diagram of our family last week. She's connected each of us with a line to a central heart to show that we all love each other. I thought it was a pretty abstract (and cool) way to illustrate a concept.
Posted by Jeremy at 9:03 PM 2 comments:

CBC -- Getting Rid of What Works?

I'm grieving the loss of CBCRadio3. The last issue is online right now, and it's got more of the same great stuff it's had for the past 105 issues -- interesting music, engaging perpsectives, quirky personalities. I'm reminded of when CBC killed Undercurrents, which might have been the best TV show they ever produced and won a couple of Geminis before mysteriously disappearing. It makes me wonder how long Monday Report will last.
Posted by Jeremy at 8:37 AM No comments: