This project is just too cool. A creative couple from Kelowna are filming a documentary about independent shops and stores and the communities that support them in the face of chains and retail giants. They're avoiding interstate highways, shunning franchises of every kind, and talking to the people who run the mom 'n pop stores all over the continent. It's wonderful to be able to follow along in their journal (even video and audio clips) from the road -- what a fascinating experiment in online journalism, and a topic that's dear to my heart.
Posted by Jeremy at 2:06 AM No comments: 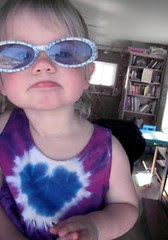 Since my memory is terrible and I can't seem to update this often enough to even cover the most irrelent broad trends in our lives, you're stuck with some random photos from the past couple of weeks.
One of the reasons I haven't been blogging much is that I've been ridiculously busy with work, but we finished the design components of the project last week, so I'm back to regular working time. Celebration. That doesn't explain why I'm typing at two in the morning, though. I'm on vacation this week, which is making me lazy and happy. We started this looong weekend with a picnic on Friday night, bringing some tasty stuff up to Scherzinger to enjoy with a bottle of their wine. Gorgeous evening, grape arbour above, vineyards stretching out across the hillsides...life is good.
Posted by Jeremy at 1:31 AM 2 comments:

Happy Birthday to It (again)

I've had no time to update the site lately. I feel like I've missed writing about so many things by now that it hardly pays to try to capture them, but I'm always glad for these little notes later. Happy second birthday to the headspacej blog this week.

Tannis and I had a great date yesterday. We got to go mountain biking together for a change, so we headed out to the Three Blind Mice area across the lake, above the Naramata Bench. Beautiful trails, a rushing creek, and my favourite riding partner. Later, we hit the wine bar at the Heritage Inn in Naramata for some gourmet pizza, local beverages and other good munchies. Pretty deluxe. Thanks to my folks for taking the girls on their Penticton adventure to Loco Landing.
Posted by Jeremy at 7:18 AM 3 comments:

Just wanted to save this thread for the suggestons on the best BC singletrack...and this one for some discussion about the riding scene in the Okanagan, sparked by an excellent article in a recent issue of Bike magazine.
Posted by Jeremy at 1:30 PM No comments: 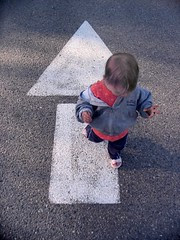 I keep forgetting that I've added a pile of fairly recent photos to my flickr account, so if you're one of those three people who pesters me for pictures, head over there and click through the pages. This batch is almost exclusively gangs of kids playing outside, with some photos of nice stationary plants for juxtaposition.
Posted by Jeremy at 1:18 AM 3 comments:

Today was our recovery day after a couple of nights in Vancouver for the big U2 show. It turned into a very social trip, starting with Myron and Tracey passing us just after we finished lunch at the Coldwater Hotel Pub in Merritt (recommended for a great burger). We met them at Moxies near GM Place for food and drinks later, feeling young, festive and decidedly kid-free.

At about 7:15 we wandered over to the show. Tracey and Tannis were behind the stage, but only five rows up -- they could read the teleprompter and knew which songs were coming up. Myron and I found a decent spot on the floor and mostly just endured the opening band. We felt quite far away from the stage until the intermission when one of the roadies came walking around the circular catwalk that extended out over the floor...suddenly we realized that we were going to be very close to the action. By the time the lights went down for the headliners, there were only 10 rows of people between us and the catwalk thingie.

Before I write pages of details, I should cover my basic impressions of the show. A few points to start, perhaps leaning into the more critical realm:So, those general ideas aside, it really all comes down to the songs. Here's how I might categorize the performances...

Incredible: Where The Streets Have No Name, Pride (In The Name Of Love), Bullet The Blue Sky, The Fly, Sunday Bloody Sunday, Bad, Miracle Drug, Beautiful Day, City Of Blinding Lights

There's not much I can say about this bunch except that they were all truly outstanding. I was blown away. The Edge's guitar work was perfection on these ones, and I couldn't believe Bono's vocal skill and emotional intensity. Obviously my tastes are skewed toward the older songs, but the two from the new album were so much better live than on the recording. Where the Streets Have No Name was probably the highlight experience of the night for me -- the buildup, thumping bass, soaring chorus...everything about it was perfect.

These are all fantastic songs, and the performances were great, but they didn't quite have the impact of the ones I listed above. The slowest ones seemed to drag...but I was thrilled that they played the older songs. Vertigo really rocked.

Ugh: Sometimes You Can't Make It On Your Own, Love And Peace Or Else, Mysterious Ways, All Because Of You, Original Of The Species, 40

Sorry, but these ones stank up the place. The first one especially -- terrible song, badly performed. Mysterious Ways probably doesn't belong on this list, but it has always been my least favourite Achtung Baby song and that album has so many better songs. Which is a segue into the list of the half-dozen tunes I would have loved to hear them play instead of these...

Songs I Wished They Had Played But Didn't: Ultraviolet, I Still Haven't Found What I'm Looking For, Who's Gonna Ride Your Wild Horses, With or Without You, Discotheque, Gone

Especially the first three...it was painful for me to not hear Ultraviolet. The dreaming aside, I looked through some of the setlists from past tours and I'm thinking that the list chosen for this tour couldn't have been much better. Overall, a fantastic show.

Friday morning I connected with my dear friend Cass, who lives a few blocks away, and blabbed for a few hours. In the afternoon Tannis and I put aside our Mennonite baggage and lounged in the calm sunshine at Wreck Beach, even taking a dip in the chilly ocean water. Thanks to Mark and Joel, we had a comfortable (and free!) place to stay both nights. We had a total blast with them the second evening, getting into a selection of cheeses, white wines and a series of topics that got more and more hilarious. Later on I kept the party going with Nick until 4am in his posh 27th-floor apartment overlooking the city. Waking up after four hours of sleep, I wasn't sure that it had been a wise decision, but it sure was fun. Angelo and Esther made us coffee and hung out with us in Chilliwack on our way out of town...the visit was too short, like always. And finally, we arrived back in Kelowna to pick up our girls. Thanks to my folks, who graciously took care of them, we got to be away long enough to really miss the little rugrats.