I don't often write about my Mennonite roots, perhaps because it's just vaguely uncool, but mostly because I've largely forsaken the culture. Over the last few months, I've had a bunch of experiences that have me thinking about those roots again.

The dude in the photo is my good friend Lorne. He still feels deeply connected to his Menno background in Altona. We've had an ongoing discussion about the topic and it always gets me stewing. It's almost impossible to separate Mennonite-ness from the other big concepts in the conversation about our shared past -- small-town/rural life, farming, the landscape of our childhoods, the influence of churches, the dynamic of small-town schools -- since we grew up in areas that were populated exclusively by Mennonites, it's all sort of one ball of wax. Anyway, Lorne gets a huge kick out of hearing me go off about this stuff after we've had a couple of beers, and we ought to have these issues dealt with by 2030 or so.

As often happens in life, when you get kinda interested in something, all kinds of related stuff starts popping up. A couple of weeks ago I made the discovery that an online friend in Asia also has Mennonite roots, and I really got into a couple of posts from Lesa (more Altona connections): her review of a complicated kindness and some of her thoughts on creativity, both with due attention to Mennonite influences (and obstacles) from her upbringing.

Lorne knows one guy named Aiden Enns who has been a sort of rogue Menno, retaining his faith but pushing it in directions that ring true for me. He started the excellent Buy Nothing Christmas movement and did a stint as the managing editor of Adbusters, one of the most thought-provoking and transformative magazines of the past decade. Now he's started geez magazine in Winnipeg. While the religious angle isn't my thing, reading through some of the articles makes me think that there are certain non-faith values with roots in Mennonite culture -- anti-consumerism, pacifism, social justice, community, helping those in need, strong family ties -- that have shaped what matters to me. I'm glad to see that MCC has retained some of those values in their organization as well. These values are certainly not unique to Mennonites, but they have stuck with me even after the food, language, songs and faith have been mostly lost.

Editor Will Braun had a couple of short articles that caught my eye: one about new-school Mennos, listing all kinds of characteristics of younger, progressive Mennonites that I felt affinity with, and his quick review of the classic More With Less Cookbook, which just re-emerged on our counter when I went downstairs for a cookie. I also enjoyed Aiden's Upwardly Mobile Mennonite Blues.

So, will I be joining a Mennonite church or starting Low German lessons any time soon? Nah, I'm thinking this reflection isn't much about doing, but it's part of understanding more about being.
Posted by Jeremy at 12:45 PM 11 comments:

I just noticed that Tegan & Sara have a listening page on New Music Canada -- just click Play All for four catchy slices of the pick-me-up soundtrack to my past year.

This reminded me of our mellow Valentine night -- the girls went to bed at a decent time, giving me and Tannis the chance to hang out by the fire listening to T&S, drinking our favourite cheap-o wine (Hawthorne Mountain Vineyards VQA Mountain Select White), munching the Armstrong extra-aged white cheddar we're addicted to right now, and solving most problems of the global and lifestyle types. That just might be the ugliest sentence I've ever written, but there's something so evocative about music, wine and food...helps me place the spot in memory for later on. Of course that exact combination could describe dozens of our evenings this winter...

Ivy also made me the most beautiful valentine -- a four-foot long banner carefully painted with hearts and love notes. They had met Nada and her girls at the bakery for an all-female Valentine's Tea earlier in the day. Ivy reported later that things are just more fun when it's girls-only, then spent at least five minutes backtracking and trying to assure me that I was still great despite being a boy.

Classic quote from Ella this week:

"Hello Ivy! Can I lie down over here and tickle your belly in Toronto?" 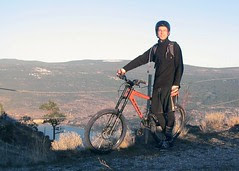 I squeezed in three short rides again this week, and on the third one, I started to feel like I was almost getting in shape -- exactly 30 minutes to the top of Giant's Head. We've had brilliant sunshine and cool winds for days, which makes for fine riding and great views.

Update: So that was last week, and I was all proud and having fun. This week I've been a total sloth, so I forced myself out for a ride on my townie yesterday and it turned into one of those rides where it feels like you're going uphill and against wind both ways. Frozen ears and hands didn't help my sense of fun either, although I was glad to hang out on the trestle a bit and check out the canyon. The digital camera got sent away for warranty repairs, so no photos on Headspacej for a while.
Posted by Jeremy at 12:33 PM 4 comments: 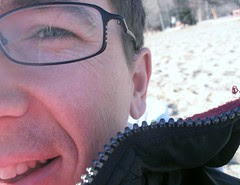 When I was giving this weekend's photos filenames, I chose "tooclose33" for this one. When you're feeling old, don't let your kids take photos of you from this close up -- seeing this one forced me to believe that laugh lines and crow's feet are great signs of character.

Aging angst aside (tempered by getting I.D.'d a few weeks ago), I had an outstanding birthday. Sushi lunch with a friend from work, and then Myron and Tracey joined us at my parents' place for my favourite supper feast (thai squash soup and wraps with outrageous peanut sauce), along with the last bottle of Dirty Laundry Gewurtztraminer Mom and Dad had been saving. We even got to watch the third period of the Canucks game while devouring my requested dessert -- chocoloate cake rolled up with whipped cream inside and chocolate glaze outside. Elijah and Ella obligingly fell asleep early, freeing us up to hang out and laugh till late. Later on I spent an hour going through old photo albums, immersing myself in nostalgia and reflecting on lives well spent.

Waking up at your folks' place is always a treat, isn't it? We lounged around and got a slow start, eventually heading over to Mission Creek Park for a hike and play session. Ran into Ivy's best old friend Mahaila at the playground, to their great joy and we hit the upscale Taco Time Cantina in our old 'hood for lunch before heading back to Summerland. Hockey Night in Canada at Myron and Tracey's later on was a perfect cap to the day, despite the Oilers (somehow, inexplicably MT's favourite team right now) beating the 'nucks in a real sleeper of a game.
Posted by Jeremy at 11:41 AM 8 comments: 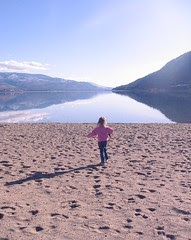 As we started walking onto the sand, Ivy suddenly ran toward the water like she was meeting an old friend. That's how we all felt on Sunday afternoon at Sunoka for a couple of hours, getting a little taste of summer in early February. We lounged on the sand in our hoodies and ate our snacks in warm sunshine. It felt like about 15 degrees, but was probably closer to ten. I couldn't stop snapping photos because the light and reflections in the lake were so beautiful, and the girls were frolicking so happily:I squeezed in a ride up to the top of Giant's Head before dark, and the lake was still that calm, but with orangey-pink light reflecting off the few clouds floating by.
Posted by Jeremy at 11:56 PM 4 comments:

Now that Ella is leaving the toddler days behind her and turning into a little girl, we're really starting to see the joy of these sisters becoming friends. Of course we also get to see the fights and meanness and irrational arguments, but that's a different story.
Posted by Jeremy at 10:59 AM 2 comments: 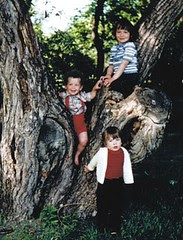 My Aunt Mary Anne sent me this old photo from 1974 (or '75?), and noticed that I had posted it to Flickr last week. That's me propped up in the V of the tree trunk, with my cousins Lloyd (above) and Conrad (below). These guys were our total buds growing up -- partners in crime and creators of every flavour of fun.

I remember my mom breaking it to us in our pre-teen years that we might not always be best friends with them, and we were in total disbelief. At that point, we had no frame of reference for a world in which the four of us wouldn't be forever tearing along backroads north of Niverville at 50 mph, all piled onto their poor old Big Red three-wheeler as if that was a safe and viable way to get around.
Posted by Jeremy at 8:56 PM No comments: 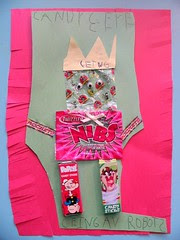 I'm loving Ivy's latest work of art. She's been collecting old candy wrappers since Halloween's big haul, and now we know why. The concept and colours are cool, but I think the maybe my favourite bits are the title and caption: "CANDY 3 EYE, CEING AV ROBOTZ" (Candy Three-Eye, King of Robots).
Posted by Jeremy at 4:47 PM 4 comments:

Had one of those warm dad-daughter moments this week. We've been listening to Yellowcard on the stereo a fair bit -- upbeat pop-punk/emo with big gang-vocal choruses, power chords and the odd inclusion of a violinist --- really it's only a few small steps up from the power ballads of the late '80s, but we love it. Anyway, we had Only One cranked up loud and Ivy and I were jumping around the living room and being stupid. At some point I collapsed in the chair, but Ivy kept going. Through the giant chorus, she was dancing and hollering all the words and pointing at me with those big blue eyes sparkling:

I was singing along and laughing with tears in my eyes, not really sure why. She bounced over to me at the end, gave me a big hug, and said, "because you are my only daddy, after all."
Posted by Jeremy at 12:28 PM 2 comments: