I've been missing all sorts of goodness from the last couple of weeks. A quick grab bag:
Posted by Jeremy at 4:00 PM 6 comments:

It's not a great photo, but this captures the vibe last night down at the cabin Lorne and Nada are staying at on the lake. They invited us down for kebobs and a swim, both of which were wonderful. A few photos:
Posted by Jeremy at 3:53 PM No comments:

Ivy's been enjoying the warm late-summer days even more than the rest of us, I think. She's so resourceful and engaged, always into some project or another. Slowing her down for a photo is a challenge at times:
Posted by Jeremy at 3:41 PM 2 comments:

I've been taking photos of everyone lately, but it is Ella who seems to make the lens of the camera glow. A few snaps of her from the last week or so:
Posted by Jeremy at 3:32 PM 2 comments:

Hawthorne Mountain Vineyards has discontinued our favourite "value-priced" wine. To add insult to injury, I called the winery when I found out to ask if they still had any kicking around. The guy I talked to said, "Well, we've got a few cases of unlabeled ones that were returned from a wedding, maybe $13 for the 1.5l magnums." I told him I'd be there in 20 minutes, and then he backtracked..."just a sec...umm...I'll just doublecheck that they're still here. (30 seconds of silence) Oh, sorry, they're not available."

Grotesque tease. Notice that he didn't say that they had been sold; he just wasn't going to sell me any.

Anyway, I embarked on a quick research project to track down any of our beloved Mountain White still for sale in the province. Every person at every place I called assumed a furtive tone, repeating the fact it was being discontinued. Several admitted that they still had stock, then caught themselves and went to "check" before returning with the sad news: "Umm...yeah, sorry...uhh...they're not available any more. They're discontinued." I KNOW THAT ALREADY. I could picture every wine store employee writing their names on every remaining case.

Finally, my research project hit paydirt -- a friendly place in West Vancouver had 10 magnums left and would hold them for us. Mark agreed to pick up the stash, and Larry and Pearl ended up hand-delivering it to our door a few days later when they returned from the coast. Why all this fuss for cheap white wine? Well, it's cheaper than milk (Editor's note: milk imported by private plane from royal organic Egyptian cows? $10/litre would be awfully pricey dairy, and proves how terrible my math skills are), VQA quality, and it seems to be good with most things...but at some point, I guess it just became a quest.
Posted by Jeremy at 3:30 PM No comments: 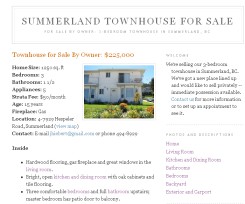 OK, it's official now -- our home is for sale. The web site is finished with updated photos, the painting and flooring projects complete (thanks to our folks), excess furniture and junk have been moved (thanks to Myron for his truck and help), local ads have been purchased and signs are going up. It's been a lot of work, but not too odious overall. It's weird to do so much preparation and then not really have any idea how it will go from this point on. Fast, pain-free sale, or months of endless showings, failed offers and disinterest? Probably somewhere in between.

Update: SOLD...on October 31st, so it felt like the latter prediction was closer to the truth. Two months of showings, some failed near-offers, but not much disinterest. Anyway, glad to have it over with.
Posted by Jeremy at 11:55 AM 4 comments: 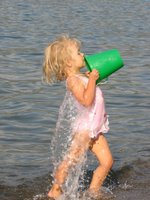 My mom has done an incredible job writing down the funny and normal things our girls say, and the result is a wonderful record of their moods, ideas and development over time. Her book of Ivy stories is a already a precious family treasure, and more recently she's been collecting Ella's monologues into beautiful short poems that really capture her spirit right now. A sample:

I’d like to be a sunflower
Sunflowers are really pretty.
We have two.

I could make swirly stairs
And I could roll up at the top
And someone could push me down
And I’d roll down
I think that would be fun.

You would be shocked to see how much paper we go through in this house. Every month or two, we sort through enormous piles of the girls' drawings and paintings and recycle stacks of them -- that still leaves behind stacks of the best stuff, which gets piled in piles of boxes or displayed throughout the house. Not that I'm complaining; I love it that they're into creative play like this, and it's fun to see them so pleased with their results.

I took this this photo of Ivy's favourite creations from one day last week. I love the variety of subjects (clockwise from the top-left) -- a garden fountain, an ivy-covered castle, portraits of Grandma Hiebert and Ella, and a space scene with Saturn, a UFO and Earth in the distance.
Posted by Jeremy at 11:46 AM No comments:

A History of Violence

I don't watch many movies. Almost none, in fact. On one hand, I wear that distinction with pride; half convincing myself that I'm saving myself untold wasted hours of terrible pop-culture drivel. On the other hand, when I do manage to see a great film that really gets into my brain, I get a glimpse of how much I'm missing and wonder why I don't watch a few each week. I also fall into the trap of assuming that it was just about the best one ever made.

Myron set up the projector in his living room last night and invited me over for a late-night movie session. After everyone else was asleep, we cracked a couple of beers and some zotes, then settled in for A History of Violence.

I'm not even sure why I'm writing this, because I'd hesitate to recommend this film to anyone -- I found it psychologically difficult to watch. The juxtaposition and intermingling of quiet, small-town life and bloody violence shocked my mental systems, and not in a pleasant way. It raises more questions than it answers, and all reach in to what we believe about ourselves: when is violence justified, how do we really become who we are, what holds families together under extreme pressure, do nice guys really finish last?

There are a few weak moments early on, and some of the scenarios don't seem entirely plausible, but these shortcomings don't at all dull the impact of the whole package. As Ebert says, "This is not a movie about plot, but about character." And the characters are fantastic, both in how the roles are written and how they are played.

William Hurt and Ed Harris portray their mob heavies with hilarious menace, and I couldn't take my eyes off of them. I actually loved most of the supporting cast, but Viggo Mortenson could have almost carried the whole thing by himself. As great as he was as Aragorn, there's more depth in the inner conflict here, and even more tension between his own desires and history's intrusions into his present life.

So, the best movie ever? Probably not, but it will likely stick in my head for a while and keep me thinking about choices, family and destiny. And it already makes me want to see more great films. What more could you ask from an hour and a half of entertainment?
Posted by Jeremy at 2:25 PM 10 comments:

After Chad and Crystal headed back east, Larry and Pearl arrived a couple of days later. They've been busily helping get the townhouse all sweet and sale-ready, although we occasionally released them from toil and servitude to hit the beach and walk into town with us.

Bill graciously lent us his yard for a campout one hot, smoky night earlier in the week. We had a great BBQ, and then we immediately put the Friesens back to work ridding the garden of the dreaded and evil Fahta Hahn. Tannis illustrated her photogenicity even while hacking out invasive weeds. Meanwhile, I lounged in the hammock with my beer and told Ella silly stories like the loafing slacker I am, pausing only to document the labour of the others. When they switched to playing with glow sticks, I quietly rejoined the party.

Now they're off to Vancouver for a few days to escape their Summerland slavemasters, vowing to only return once we've finished all possible work around our place. I'll probably use the time to continue my streak of going riding every day.
Posted by Jeremy at 12:24 PM 3 comments:

Tannis's brother Chad and his family were out for a quick visit last week. Of course our girls were ecstatic about hanging out with their cousins. When we first met them at their campground, they sat in this little circle of lawn chairs and caught up on the latest news for at least 20 minutes. When they started bouncing around, we took them for a long walk down the creek to the lake to tire them out.

The next day the whole crew hung out at Sunoka and went pedal-boating (witness the delight on Ivy's face). For a late lunch we met at Thornhaven for a picnic and a bottle of wine. The kids were great together, and the grown-ups got to sit around and talk more than usual. Later on everyone convened at our place for supper and after eating we took the kids down to Peach Orchard Beach so they could burn some energy on the playground. Great visit overall, but way too short -- next time we'll insist they stay three or four days.
Posted by Jeremy at 11:55 AM 2 comments:

Silk Scarf Winery is new to the Summerland scene, near Dirty Laundry (sadly sold out for the season) and Thornhaven above Trout Creek. They've converted an old orchard house into a very cool tasting room and the wines were excellent. Ivy and I popped by there on our 10 km trail-a-bike ride through the orchards to meet the whole crew down at Powell Beach on the weekend (after a decadent Summerland Sweets stop for ice cream and checking out the steam train when it arrived at the trestle). Ivy sampled big, black cherries while I sipped wine, and we both decided that we'll be going back again soon.
Posted by Jeremy at 3:13 PM No comments:

I wish this title applied to one (or both) of my kids, but the official title truly goes to Elijah. This photo conveys only a fraction of his oversupply of joy. He's got sweet "hockey tattoos" too. A couple more photos of him and his pa: floating out with the big boats and providing pure-stoke propulsion for the floatie.
Posted by Jeremy at 12:22 PM No comments: