Sunoka was amazing yesterday -- warm and calm and oh-so-mellow. We did a three-hour session and had to tear ourselves away when we got too hungry to stay longer. This photo documents what might be my last swim of the season -- the water is getting pretty chilly now, and it only felt nice because it was so hot on the sand. A few photos from the afternoon:
09-30-06 Update: Five days later, my assertion that I might have enjoyed my last swim of the season seems laughable. We've had a politically-correct "First Nations Summer" here this week and I think we hit the beach every day, with the sun still hot enough to send us into the water for glorious swims. No people, few boats, and crystal-clear water this time of year. Looks like it's coming to an end this weekend, though. Nice to get a last bit of summer before real autumn kicks in.
Posted by Jeremy at 11:44 AM No comments:

Both nights this weekend we ended up at Bill's place, enjoying good food and beverages with friends. 14 people Saturday night made for a top-notch party, and the kids were in their glory "camping" in the camper van. A few photos of the proceedings:
Posted by Jeremy at 8:05 AM 6 comments:

I spent last week in Culver City, a section of Los Angeles that is home to Xap, the new corporate parent of Bridges. Work trips usually mean a pretty heavy schedule, so there weren't really any touristy sidetrips except for two amazing dinners out at i cugini in Santa Monica and Joe's in Venice Beach. Very cool areas -- would be fun to spend more time in those oceanside neighbourhoods.

I couldn't believe the car culture down there, with freeways and traffic everywhere, and seemingly everyone driving $60,000 vehicles. It's as spread out and smoggy as I had imagined. Flying past the famous Hollywood sign felt a little surreal on the way in, as if it should only exist as an imaginary place.
Posted by Jeremy at 2:21 PM 5 comments:

We babysat Sloane a couple of weeks ago, and the girls just adored her. Ella held her for a while, but Ivy seemed to have the most baby charm -- Sloane kept smilling and cooing every time she came around. It was a total-chaos evening with the Hildebrands over for supper with their girls as well, but it was fun to have a full house and lots of action.

Myron and Tracey returned the babysitting favour last weekend when we had our open house. Unfortunately, the turnout was poor and no offers materialized. This week there have been some good nibbles again, so we're hoping someone serious appears soon.
Posted by Jeremy at 11:40 AM 2 comments:

Hikers and a Hodgepodge

Looking back through my Flickr photos, I realized that I missed a bunch at the beginning of September:
Posted by Jeremy at 12:34 PM 2 comments: 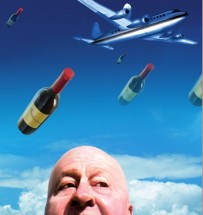 On the way out of the library with the girls last night, a documentary DVD caught my eye, so I grabbed it without paying much attention. Mondovino takes a look at how the global marketplace for wine is changing by following the stories of several small European winemakers and contrasting their approach with the slick hyper-marketing of big, prestigious wine brands.

The cinematography is awful, with mostly shaky hand-held shots and bizarre ultra-closeup zooming that you might see the first time a child discovers zoom on a digital camera. It was incredibly frustrating to watch at times because the scenes and personalities themselves were so compelling and so badly captured. Terrible editing, too -- if they had cut about 45 minutes of random dogs, irrelevant city montages, and pointless off-track dialogue, it would have improved the film immeasurably. I got a Blair-Witch-like headache from all the motion and focus problems...but I couldn't take my eyes off of it either.

Many of the places portrayed were truly gorgeous, especially Tuscany and the south of France. The shots from Napa Valley are beautiful too, but at that point the absurdity of the wine business itself starts to reveal itself. Wine is great and all, but really it's just fermented grape juice. The film pokes far enough to help you see that the industry is just playing a big game, motivated mostly by greed and ego.

The filmmaker has a great gift for drawing out the personalities of the characters he discovers, from the lowliest grape farmer in Argentina to the most powerful CEO in the wine world. Several of the dialogues are gripping in a way that fiction would have a hard time duplicating. Two deep themes run through most of the interviews, regardless of where the subjects are located on a spectrum from the keepers of backyard vineyards to the directors of the largest multinational corporations -- the importance of land and family. They're invoked repeatedly, often in an attempt to create stories and mystique around their brands, often too busy marketing to recognize the inherent value in both.
Posted by Jeremy at 9:50 AM No comments:

An update on Ivy's first week of school: after that first day of (understandable) reluctance to ride the bus, a week later Ivy is already a veteran. The next morning she was as determined, but this time there was no turning back -- she marched right up and rode to school. Since then she's done full days at school, riding the bus both ways and she's quite proud of her independence. (Sidenote: this reminds me of the fascinating photo Ang posted of Em on the bus last year)

We ply her with endless questions when she returns each day, and she quickly tires of going over the minutia of Kindergarten life. One of the ongoing storylines is the total divide between boys and girls in the class. At five years old!

One day this week, Ivy had asked a gang of boys whether girls were allowed on top of the playground equipment, and they had said, "yes, but only two". It sounds like they've already learned that she completely ignores the call for no girls allowed, after some previous altercations. So Ivy's response was to go round up a half-dozen girls to storm their citadel and utterly rebuke the two-girl rule.
Posted by Jeremy at 9:11 AM 4 comments: 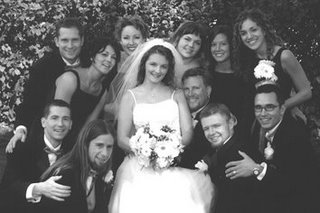 Heather posted this photo from their wedding this week as they happily celebrated their third anniversary. It's a great wedding picture -- the bride and groom look thrilled, and they're surrounded by their good friends. But are they a bit too surrounded for comfort's sake?

Steve (longhair, front-left) is thinking, "I can't believe Jer H. is touching me tenderly right now." Jer P. (top-left) would have toppled over us if he hadn't been draped over that poor girl's back, and he was also trying to keep me snuggled in close to Steve with a warm shoulder grip. Myron (bottom-right) was intimately caressing Brent, who had been busy trying to get closer to Plett when the photographer insisted he look at the camera. Ang simply looks pleased that she managed to mostly avoid these full-body-contact shenanigans.
Posted by Jeremy at 2:59 PM 10 comments:

Ivy went to school yesterday for an hour of orientation with Tannis there to fill in forms and be nearby. They found out that her class is being split into two smaller classes of 13 students each -- can't argue with that student-teacher ratio. This morning she was determined to ride the bus to her second day of school, with no mommy and daddy around...until halfway through breakfast when she broke down in tears and started rethinking the bus plan. So we agreed that I'd take her in the car and we'd follow the bus to school to get the hang of the route.

On the way, we watched kids get on the bus and I suggested that Ivy could try envisioning what it might be like to be on the bus with them, seeing the same orchards going by and following the same route without me there. She asked me to define "envisioning" (she's a total word geek, always wanting to know what things mean), but before I could finish my explanation, she interrupted me: "Daddy, maybe if you'd stop talking, I could do some better envisioning." Fair enough.

When we got there, she insisted that I escort her to the room. We we were a bit early, so she played on the playground for a while, running over to me to announce that she had "made a bunch of friends already" and indeed she was running with a pack by the time the door to the room was opened to welcome them in. She gave me a quick kiss and a "see ya in two hours" before disappearing in a swarm of kids with new backpacks, bright eyes and hovering parents. Super, super cute.

Just as we left home, I grabbed the camera and asked her what she was expecting to do at school:

Afterwards, she toured me around her classroom (after asking her teacher permission, of course) proudly, and I saw her hanging out with old and new friends in the schoolyard. Her main report was: "My first day of Kindergarten was very fun, very exciting...but also very tiring." The kids apparently all did well, pouring out with new paintings and energy to burn. So it begins.
Posted by Jeremy at 11:33 AM 10 comments: