Watching NHL hockey is my guilty-pop-culture pleasure -- the only sport I follow, and really the only TV I watch. I had a draft post put together of my first-round playoff predictions, but never posted it because I waited too long and it's lame to post predictions once the round has started.

In retrospect, I would have been half right, the same ratio as Maggie the Monkey. Where I went wrong in the East: I thought the Lightning was going to upset New Jersey (or wanted them to, at least), and predicted a Rangers loss. In the West, I bet against "my" team and they proved me wrong yet again. I also thought Minnesota would upset the Ducks, which apparently wasn't even close.

So, just under the wire, here are my second-round predictions (you'd think I would have learned from my earlier failures):

Cheering for: Canucks
Prediction: Ducks in 6

Like I said, I've been skeptical about the Canucks' chances of winning all year...even while they were winning. I never thought they'd win the Northwest Division. I thought Dallas was going to whip them last round. To my delight, they keep surprising me and proving me wrong, and I will be cheering for them again, even though I'm fully expecting Anaheim to destroy them. Loungo will be outstanding, Vancouver's second and third liners will pot two or three garbage goals (in the whole series), the Sedins will be hot and cold with Naslund, and the Ducks will dominate. My lack of faith protects me psychologically and seems to ensure that they eke out improbable wins, so here's hoping I'm wrong (yet again).

If I thought the Canucks had a chance against Anaheim, I'd probably hope for Detroit (despite my strong dislike for their team) because I don't think Vancouver could beat San Jose. But I'm seeing a Battle of California emerging here and I like San Jose a lot more than Detroit. I'll probably only watch this one through post-game highlights, but it might be the best series in the round.

Cheering for: Rangers
Prediction: Buffalo in 6

I couldn't really care less about either of these teams. The Rangers are have more interesting characters and storylines, but I won't likely pay any attention here, never mind actually cheering for either team.

Cheering for: Senators
Prediction: Senators in 6

How could anyone really be a fan of New Jersey? This is probably the only series other than Vancouver/Anaheim where I'll watch the games. I've always liked Ottawa and it's been disappointing to see them flame out in the playoffs every year. They're looking great this season and I'd love to see them crush New Jersey, but I've probably let my bias influence my prediction too much -- the Devils could turn the tables.

Overall, I thought the first round was a bit dull. probably because the Dallas/Vancouver series was such a snoozer. Bad reffing hasn't helped -- if these phantom hooking calls decide who wins the Cup this year, I'll...whine and complain even more. I missed seeing Edmonton pull their playoff shenanigans this year, although it was pleasing to see Calgary's Flamers get knocked out. Any other hockey fans out there? Would love to hear your thoughts.
Posted by Jeremy at 10:15 AM 22 comments:

Nick's summary of my blog a couple of years ago: "Yeah, all right already, we know you like biking and your kids are cute. We get it." Well, this one combines those two elements into one video post, the first showing Ivy's first wobbly pedalling on her classic bike. I'm SO proud of her.

On a tip from bike shop owner and old classmate Pat Siemens, I ditched the training wheels and pedals off her old bike a couple of weeks ago so she could push herself along with her feet as she learned the balance and steering -- WAY better for learning than training wheels. Listen for Ella saying "she's flying!" and Ivy calling out "I'm going to town!" as she gets to the road:

I also brought my camera on my new "backyard" ride -- it's a very nice little loop with an eight-minute road ride to the further trailhead, a short push and then a beautiful climb through a meadow. On the way back it's a a nice long rolling singletrack descent that gets me back home just over half an hour after I left...short enough for a lunch-break ride, which stokes me up.

The section of trail in the video twists down a long, dusty ridge with sagebrush and cacti (got one stuck in my leg on this ride) that leads back into town. The camera swings to the right at the end of the clip to try to capture the deer I scared up from beside the trail. Good livin': 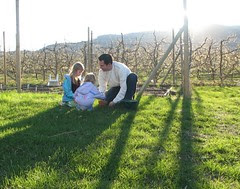 I keep forgetting to note some of the highlights of the things we've been doing lately, so it's a brain-dump post:
Posted by Jeremy at 9:20 AM 2 comments: 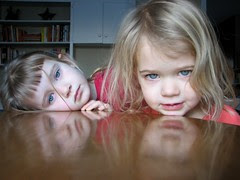 If I'm going to keep posting photos of local weeds, I feel that I also have to offer some of what most loyal readers (all three of them) seem to actually come here for. A mini-gallery of Hiebert-girl cuteness from the past while:
Posted by Jeremy at 9:06 AM 9 comments: 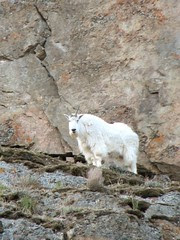 Not everyone is into photos of weeds, the most common birds and driftwood, and I had 50 photos sitting in Flickr that I haven't put up here lately...so I dumped a bunch into one post for the odd duck who likes this stuff (that'd be me):
Posted by Jeremy at 8:44 AM 2 comments: 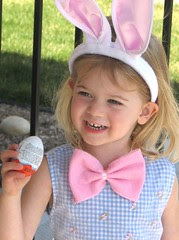 So we drive up to the Hiebert house on Easter Sunday to see a special new sign planted in the garden. Our girls have come to expect a rip-roaring treasure hunt and this year did not disappoint. Poetic clues, separate paths for each dear grand-daughter and a serious pile of loot -- they were thrilled. A few other photos from the long weekend:
Posted by Jeremy at 4:03 PM 2 comments: 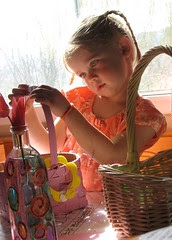 I know, I know; I'm the classic (annoying) over-proud dad who takes too many pictures of his daughters...but seriously, Ella is coming alive this spring along with the trees and flowers. A couple more:
Posted by Jeremy at 11:53 PM 6 comments:

Crazy nice day here today, which we mostly spent lying in the sun. It's this day you imagine all winter, trying to remeber how it feels to be truly warm and comfortable. Mom brought a delicious picnic over and we all wandered around the Ornamental Gardens afterward. When we got home, I fell asleep in the hammock...mellow-o-rama.

Random photos: hip mama, buzzing bee, Tan in the sunroom, hens 'n chicks and a mini Ivy gallery -- looking serious, accessorizing with grass, a look of joy, and practicing two-wheeled fun with the "run-bike".
Posted by Jeremy at 4:14 PM 8 comments: 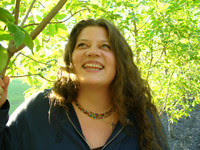 Not only does Lola's blog make my blog seem lame, it makes my life seem lame. I can't read her accounts of living and teaching in Uganda without questioning nearly everything I think is important, difficult or worth doing. She shares her brother's gift for describing scenes with emotional intensity, and engages people with the love and open heart of an angel.

Highlights: connecting with her students, a personal experience of political upheaval, attending a Ugandan funeral and a wedding, seeing the need in the streets, reflecting on what she didn't know before and loneliness.
Posted by Jeremy at 10:04 AM 7 comments:

I occasionally add new stuff over on my music blog -- new songs I'm listening to and enjoying enough to want to write a bit about them. Here are a few of the latest ones: Listen to all the songs on the blog in the player of your choice from the full playlist.
Posted by Jeremy at 8:57 AM No comments: 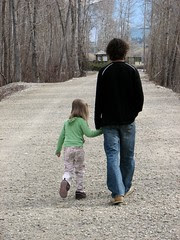 Pretty mellow weekend, kicked off with me and Tannis going on a date to the Wild Apple Grill while my folks watched the girls. We all stayed over and hit some favourite Kelowna spots in the morning: The Laughing Moon for breakfast, a walk on the Greenway, then spudnuts at Pioneer Market before heading back to Summerland for the rest of the weekend.

Highlights from Sunday included a nice long ride with Myron above his place, exploring an area for a new trail, and an hour on the phone with Greg, hearing how things are going with the new baby. A few fairly random photos from the last couple of days:
Posted by Jeremy at 2:26 PM No comments: