Tannis posted a minute of little Ezra video clips; worth checking out if that's your kind of thing.

Update: Here's another minute of more recent Ezra clips from the last few days. He's just at that stage where he's starting to smile and goo and gah a lot, which seems like excellent feedback after almost two months of him mostly crying, staring or sleeping. He just came off two or three fantastic days where he was sleeping well, happy and mellow. Then he got this cold we've all been fighting...so he's a bit crankier now than the video might imply.

Oh, and this is super-dumb, and I do have better things to do with my time...but...oh, just click on the photo below: 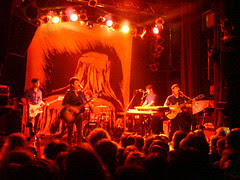 The Okanagan doesn't often get really cool bands, despite it being an easy stop between Vancouver and Calgary...so when I found out that Tegan and Sara were playing in Kelowna, I snapped up a couple of tickets before they sold out. My folks watched all THREE kids so Tannis and I could have a date, and what a great date it was.

First of all, some history. I think it was Jason who recommended So Jealous after I was stoked on a couple of songs of theirs early in 2005. An excellent recommendation, and I couldn't believe that they weren't superstars with the strength of that album, a great look, a great story (indie rock twin sisters, etc). Nick was a fan as well, but said they sucked in concert when he saw them, which set my expectations low for this show -- I figured they were more of a studio band or whatever, and never bothered to watch videos or listen to tracks from their live shows. Then when The Con came out, I was pretty amped on five or six songs, but J pointed out that the album as a whole didn't hang together very well and I realized that I really strongly disliked five or six of the new songs.

Well, was I ever surprised by this show. Picture your favourite singer, then clone him or her so that the clone can sing perfect backup harmonies throughout every song. Their singing was SO good, and the music so very tight and smart. Great venue, full of adoring fans, and we were right in the middle in the seventh row. Most of the songs are so short that they must have played at least 25, maybe more. The stuff off So Jealous rocked, and they played a few older songs, but the focus was on the new album. Every song from The Con was super tight and intense -- I even enjoyed the songs I didn't like on the album...and LOVED the best songs.
Posted by Jeremy at 11:21 AM 4 comments:

The Seattle Times had an article about our region again this week: Bold wines, vistas and ambitions in B.C.'s South Okanagan Valley. I'm seeing more and more attention from the outside world, with people recognizing the things that make the valley special. As a result, it's changing rapidly, with money pouring in. In many cases the changes are great, but I also worry about a paradise-lost scenario where the new tramples the old and we forget why it was great to begin with.
Posted by Jeremy at 9:55 AM No comments:

We didn't really have the classic hot, dry summer we're used to here, which was kinda nice for a change. But the weather this week has been fantastic, and it looks like it's supposed to stay that way for a while. I'm not saying it's inherently better here than anywhere else...I'm just sayin'.
Posted by Jeremy at 10:34 PM No comments: 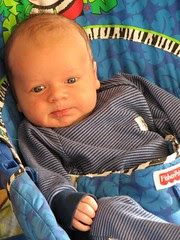 I realize I've been neglecting the required posts of Ezra photos -- here are a few to satisfy the masses (all six of you):
Posted by Jeremy at 9:54 PM 6 comments: 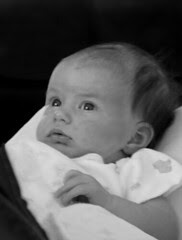 ...is a total doll. It was such an honour to meet her on the weekend. She's a lucky kid, this Imogene. Her first-time parents are looking like old pros, sharing the load and loving her to pieces. They were gracious enough to let me post a few photos, so you get to see too:
Posted by Jeremy at 10:09 PM 6 comments: 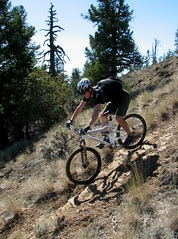 Angelo and Esther were out this weekend. The purpose of the visit was ostensibly to introduce each other to our dear babies, born a mere four days apart, and I promise to post about that soon enough (although never soon enough for the baby-crazed out there). But of course we went riding and of course I was super stoked.

A few photos of Angelo: kicking up dust, waiting for me yet again, and descending a rocky ridge.

Angelo also took a couple of great shots of me, including one in the classic style of bike magazine, with the singletrack unwinding in both directions and the local scenery providing the backdrop. Also, this one of me leaning into a corner at speed might be the best photo ever taken of me on a bike.

And finally, I experimented with two 40-second videos on the descent, both taken with me riding one-handed so I could hold the camera...so they're not great, but still give you the basic idea. I was following Angelo as best I could through two sections mellow enough to attempt with one hand and limited braking capability. Here they are stitched together with some music added:

I love it when Tannis posts stuff so I don't have to: a general update with photos and an accurate account of the fruit and veggies we've canned and frozen so far this year.
Posted by Jeremy at 12:07 AM No comments:

Last year at about this time, we sent Ivy out into the world of Kindergarten. Now she's starting Grade 1 with more confidence. Last week, they did an odd mixed-grade group project while they sorted out the classes, but today she finally got into her actual class. Her teacher is Mrs. Hopkins, a long-time Trout Creek Elementary teacher with a stellar reputation, and many of her friends are in the class as well (her main concern). Like last year, I asked her what she what she was expecting out of the first day of school:

We're so proud of our big girl -- apparently she read a book out loud to the whole class on the first day. Why, oh why, did I not hover at the back of the room all day with a video camera?
Posted by Jeremy at 10:59 AM 2 comments:

The girls and I spent a bit of time this morning making their first movie. Ivy wanted to make one for Ezra in the "Baby Einstein" genre, so she storyboarded a few scenes and we shot it in a few minutes with Ella's help. The girls howled when we watched it later.
Posted by Jeremy at 11:39 AM 4 comments: