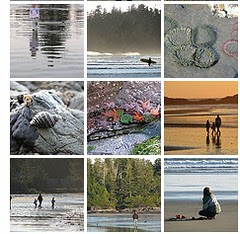 We enjoyed a truly excellent trip to Vancouver Island last week -- our first attempt at a road trip with the new full crew. Most of the 400+ photos I took were terrible, but I did post some of the better ones. You can view them as a slideshow if you're so inclined. Tannis had more gumption than I, putting together a nice post reflecting on the trip. Ang also posted a classic photo and some kind words about our excellent stop at their place in Qualicum Beach.

A few months at home with Ezra has been great, but I think we were feeling a bit of cabin fever before we left. My mom offered that we could join them in Victoria and we jumped at it. Then we started thinking that if we were on the island anyway, we should hit Tofino, an epic spot on the west coast of the island that we've been trying to get back to for a decade or so. On a whim, I floated the idea to Angelo and Esther and they responded almost immediately that they would join us -- what fun! Then we all agreed to descend on Steve and Ang's in Qualicum Beach on the way back, turning a family weekend into a much more exciting and social week-long adventure.

Anyway, a few highlights with a couple of links to the related photos:And that was pretty much that. A serious adventure for this five-person crew. Thanks to everyone on the trip for making it great...and especially my mom for initiating the whole thing and making it extra special in Victoria. 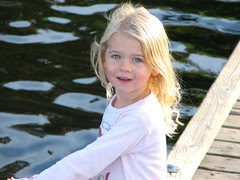 I know I've been neglecting this space, but I couldn't let the day pass without a short tribute to our beloved Ella on her fourth birthday. We can't believe how she's changing, and how her true nature is emerging.

She's an angelic free spirit,
sprinting into the future and rarely slowing down. The pace keeps accelerating -- from the tricycle in April to the run-bike all summer, then pedaling off on her new birthday bike as if it's no big deal this week (video to come). Going from little sister to big sister didn't seem to bother her a bit. One year ago she seemed like such a little girl, but not this year.

Update: Here's the video of Ella riding her new bike on her birthday: