In a sort of local media blitz (for sleepy Slumberland), our local paper has been generous in their coverage of the gallery show: last week they previewed it with Snow and Ice Abstracts Featured and this week it was Ice Photos Fill Gallery Walls.

Update: Also, the Penticton Herald coverage of opening, a Southern Exposure photo feature, and a repeat of the second Summerland Review article in the Penticton Western. I think people on the streets of Penticton are starting to recognize me...
Posted by Jeremy at 12:38 AM No comments:

For anyone who isn't entirely sick of hearing me talk about this gallery show, the CBC North By Northwest interview was aired Saturday morning on CBC Radio One (in BC). The archived show (11MB MP3) is also available online -- my bit starts at 15:52 and runs through to the end at 23:31.

I think it went pretty well. Thankfully they edited out some of my umms and uhhs, and I thought the part with me reading from the book intro sounded ok. Thanks to those of you who called and wrote with encouragement!

For anybody arriving here looking for the ice photos, here are the pertinent links:

Yikes, almost a month since my last post, and no mention of Christmas as mid-January comes and goes. Words of concern have started to pop up from my three-to-five loyal blog readers. It was an excellent holiday season and things have been going well since -- I didn't take much time off, but work was fairly mellow and it felt like I had lots of time with the family. A few photos and notes: 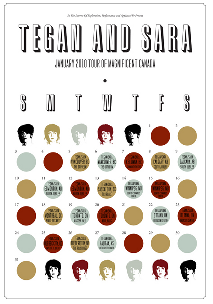 We saw Tegan and Sara for the first time in 2007. It might have been too soon to see them again. Not that they weren't good this time -- I found them very entertaining, funny and sharp -- but the novelty had sort of worn off, I guess. Like I said way too many times in my bloated U2 review, seeing any band twice in a few years involves the hazard of repeats: the bad songs are still bad, and the good ones are still good.

Anyway, I won't burden anyone (myself especially) with the same ridiculous level of painstaking analysis this time. Lots of middle-of-the-road performances, but here are the ones that stood out for me:

Arrow, Hell, and Someday were real standouts from the new album -- On Directing wasn't one of my favourites from Sainthood, but they really kicked it live. They played pretty much the whole rest of the album, which fell flat as far as I was concerned. I thought Burn Your Life Down and Nineteen were the lone highlights from the last album (they didn't play Floorplan, my fave). Walking With A Ghost, I Bet It Stung, Where Does The Good Go and Speak Slow represented So Jealous with aplomb (the title track, not so much) -- of course I would have liked to have heard more of that one. They closed with a rousing rendition of Living Room, one of the few older songs -- great closer, energetic and fun.

As I really do like this band, it pains me a bit to list the real stinkers, but these ones were pretty awful: Don’t Rush, Red Belt, The Cure, Night Watch, Soil, Soil, and Alligator.

The acoustic encore mini-set was anticlimactic, although I loved that they mocked the ritual of encores...and their harmonies for Feel it in My Bones were outstanding. Very young crowd, although with a sprinkling of oldsters (like us), definitely skewed female. All in all, a fun night out.
Posted by Jeremy at 10:17 AM No comments:

Two years ago I started the tradition (although I didn't know that then) of reflecting on my creative goals and setting some for the new year. I didn't do too hot on that first set of goals when I looked at them again last year.

I might have set more realistic goals at that point, because it seems like I did slightly better -- probably helped to limit the goals to two areas, and I think I'll stick with that again. I'd love to paint, but it's not going to happen.

2009: "This year I'd love to learn some fiddle music, in Irish and gypsy styles. I may also spring for a new violin, having found some limitations in this rental of mine."

It seems bizarre to me that last year at this time the viola wasn't even on my radar yet. I did learn a few fiddle tunes on the violin last year, but I became much more absorbed in the viola as the year progressed, and almost exclusively composing my own stuff. I largely ignored the second Suzuki book I thought I'd dig into. Gear-wise, I got that nice violin (which I enjoyed a lot over the holidays again) for my birthday, an electric 5-string and a couple of violas, one of which is now for sale.

Musical highlights for me last year included surviving my recital, playing on Robin's album (and performing at the CD release party), playing with Ivy and my mom at our summer party in August, the Leir House fiddle jam, and getting ever-so-slightly better as the months tick by.

2009: "Gear-wise...the only thing to covet being a nice wide angle lens and my first tripod. I'd like to strive for two somewhat opposite goals: more variety in my choice of subjects, and one or two themes that I start to build a sort of collection around."

Something to be said for setting good goals -- my two chosen themes were ice and orchards, and I was very happy with those projects. The Blurb book came out of the ice project, which led to the art show, which could lead to other things as well -- so far a very successful undertaking. I've learned things about that process that I should be able to apply to other areas as well.

The second part of that goal -- more variety in my subjects -- I did ok on, I think. Still lots of family snapshots, but I was proud of my other new sets: wild horses, trees, abstracts, prairie trip, music, wild things, Vancouver trip, etc. I also got the sweet wide angle, and it facilitated many good shots this year. Never got the tripod.

I'm hoping that the show at the art gallery goes well, but most of the work for that happened last year already. I'm feeling more ambitious and focused on photography than I was this time last year, which may mean I take it up a notch or get burnt out and take up basket weaving. More specific:And then there's blogging, which should probably be included here. I get regular bouts of blog envy, finding ones with amazing writing, gorgeous layouts, outrageous photos and more authenticity. BUT, I'm mostly just glad that I've kept this one going even if it limps sometimes. Maybe it's not so creative, but at least it's not going away.