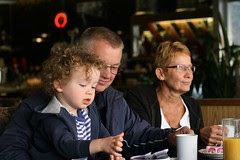 Tannis's parents had a window of time between returning from the Dominican and heading back to work, so they hopped in their car and hightailed it to the Okanagan for a quick trip. As always, they were perfect guests, helping with the food and cleanups, entertaining the kids and making us all wish we lived closer together. Larry did some of the urgent fix-up things around the house that we (ok, I) had been neglecting -- handyman gifts. I realized the day before they were leaving that I hadn't really taken any photos, so quickly snapped a few: 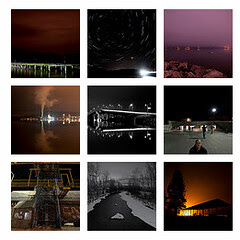 Happy birthday to cousin Jason today. He really dove into night photography this winter, and it's been inspiring to see the images emerge. I thought I'd create a gallery of my favourites of those, to honour the birthday boy in a small way and show off some of the coolest stuff he captured over the last few months: Jason : Nightwalker.
Posted by Jeremy at 11:49 AM No comments:

(I was summarizing what was going on in The Two Towers the other night...)

Me: Our friends have met Gandalf, and they know Merry and Pippin are going to be ok hanging out with the Ents, so now they're going to go visit the king of Rohan.
Ella: Are we finally going to meet Eowyn?
Me: Yes, she's sort of like a princess of Rohan, a niece of the king.
Ella: Is she more of an action princess, or more of a sleepy princess?
Me: (laughing) Oh, you can be sure that she's an action princess -- she causes some serious havoc later in the story.
Ella: Thank goodness -- Galadriel seemed like too much of a sleepy princess to me.
Posted by Jeremy at 10:24 PM No comments: 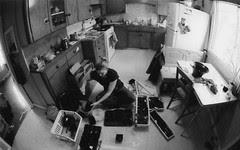 I got a roll of film developed a couple of weeks ago and added to my set of film photos taken with my beloved old Minolta. I'm embarrassed to note that the first photo showed Ella on our skating loop from two winters ago, which means I have been sadly neglecting the film kit. My first impression was that the developing sucked, but as I look at them more, they're growing on me. This happens every time because my expectations are always too high when I'm waiting to get photos back, leading to initial disappointment and then a slow realization that there is something special about them after all.

This one was a very happy addition to the sisters set -- I hope these two can always appreciate their great luck in having each other. Of course most of the shots I liked best were taken with Pappy's old 16mm fisheye lens, including another one of Tannis teaching Ivy to use the wheel in our recent clay session. I'm not sure it's any better than the ones I took with my other camera, but I love the print. 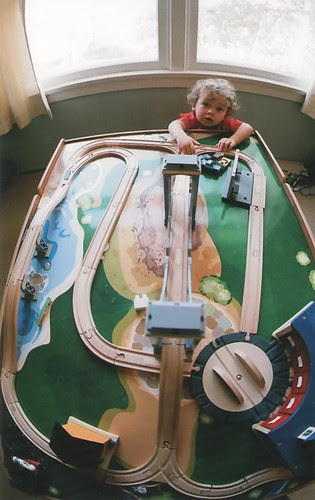 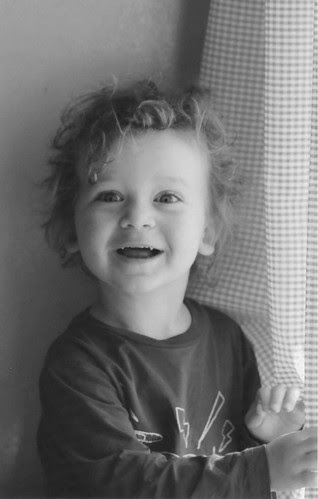 Easter With Esther (and Family) 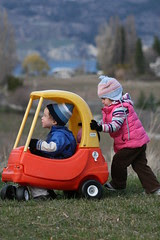 Honoured guests joined us for Easter weekend this year: the Vancouver Eidses. Dear Imogene and Ezra played like mad, and were great buddies with very few exceptions -- they both seemed to run out of gas a bit as the weekend progressed, but generally kept it together for a couple of two-year-olds.

My folks came and watched all the kids Saturday night (and mom brought eclairs!) so we could go on a double-date that was marred only by my own pigheadedness in trying to "win" a conversation that should have had no winners or losers. Esther showed great patience with me. Local Lounge put on good eats and beverages, the lake listened in, and we delved into a wide range of topics before it was time to bolt back to the little ones.

Angelo and I got to do our favourite thing together -- spinning pedals on singletrack -- on a ride up and down Giant's Head and then a long cross-country trek out past the trestle the next day. Plenty of laughter and analyzing and beer-drinking followed. Tannis also managed to fit in a hockey tournament (the kids got to be rink rats), And then just like that, the long weekend felt too short. 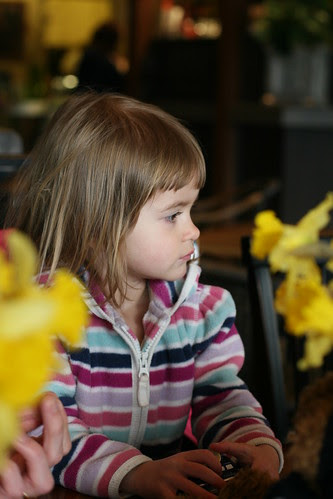 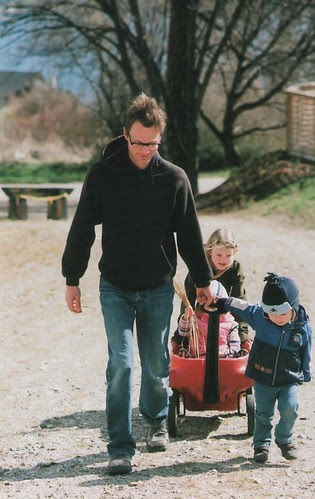 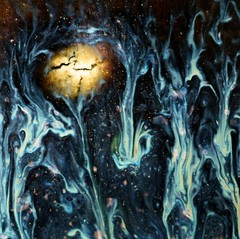 My media intake over the past month or so...and no, these photos have nothing to do with the words -- just some eye candy. 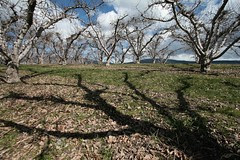 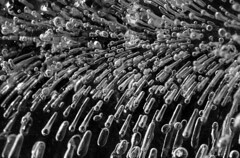 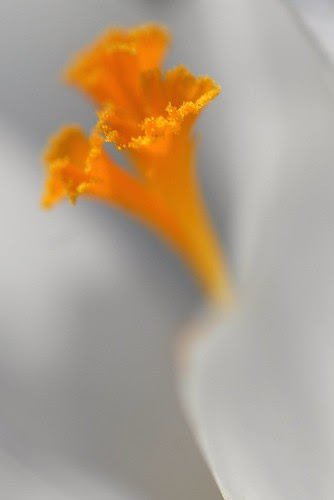 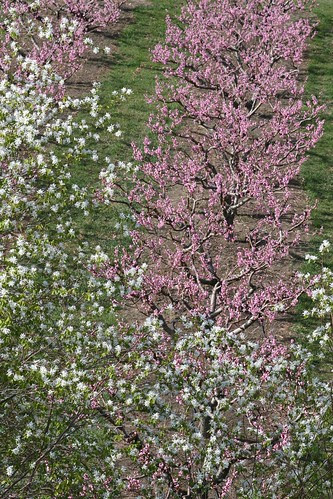 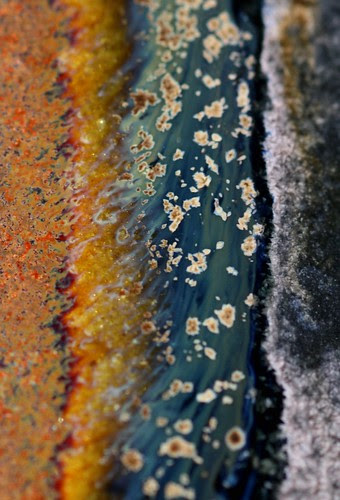 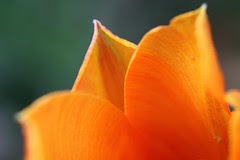 Ahh, the annual fool's game -- trying to guess where the upsets might happen, who might fall apart, and which teams will shine. These posts always make it look like I'm a much more passionate fan than I really am. We don't even have cable TV, so my exposure to the NHL is all through online highlights, blogs and the occasional streamed game.

That said, I do love hockey, both playing and following the pros. I joined an eclectic bunch again for our hockey pool this season, including Plett, Brent F., and old classmate Warren (Mino) -- ended up in second place on the strength of Art Ross winner Henrik Sedin. I wasn't even close to catching Brent's older brother Jason, who ran away with it -- for all I know, he spent all those decades at U of M researching advanced statistical analysis solely so it could be applied to fantasy hockey. My "methodology" is more...umm...random than that.

I don't think I've heard of anyone who has given the Habs even the tiniest chance of an upset here. It would be fine by me if they could win it -- not that I hate the Capitals, but Myron's lifelong Montreal fandom must have rubbed off on me just a bit. At least a Washington win will set up more exciting later rounds: Washington in 5.

I always lose when I bet against Brodeur, but I've never been able to like the Devils. My preferred outcome would be a win for the Flyers, and although I have little conviction, I've gotta have at least one upset in my picks: Philadelphia in 7.

Ottawa has traditionally been my third-favourite team. They were weird this season, with outrageous winning streaks and horrific slumps, and somehow limped into the playoffs matched up against the defending champs. It doesn't look good for them, and I'll hope for their sake that my prediction is awful: Pittsburgh in 4.

Two teams I don't really follow. Apologies to my cousin-in-law and Bruins superfan Shane -- this is a coin toss: Buffalo in 6.

I've always liked the Sharks better than the Avalanche, and it sure looks like they'll pound the lower seed in this case. If they Canucks can survive their first two rounds, they'll likely face these guys...so I'd be happy if someone at least tires them out a bit, but I don't see that happening: San Jose in 4.

The Blackhawks knocked the Canucks out last year, and look to be more of a powerhouse this year, so I'd love to see them go out in the first round. I doubt it'll happen, and I think they'll be exciting to watch in later rounds. Sadly, I suspect that last year's second-round match-up will be repeated with the same result (a loss for the Canucks). For this round, Nashville's toast: Chicago in 6.

This is a rare one where what I hope for and what I think will transpire are perfectly aligned. Luongo just has to be good enough, which is what he was all season. If Willie Mitchell was back, bolstering a shaky Canuck defense, this could be a sweep. Not that I'm taking the Kings lightly -- they look like a very fast, smart team this year and I think every game will be close. Cousin Richard will be disappointed: Vancouver in 5.

Nobody wanted their team facing Detroit the way they were winning down the stretch. And despite Phoenix finishing ahead of them, it would seem to be considered an upset if the Coyotes won. I know there isn't much connecting them to the Jets of olden times, but here's hoping: Phoenix in 7.


I'll extend this exercise in futility by predicting the second-rounders as well (subject to change before that round, adjusted for my inevitable misses from this round): And since this is already in the realm of ridiculous, I'll say San Jose vs Washington in the final, with San Jose finally ending their playoff curse and taking the cup. Yes, I've made this mistake before, and no, I haven't learned from history.

As always, please feel free to leave your own predictions in the comments section, if this is your sort of thing.

Update After 1st Round: Well, 5 outta 8 ain't great, but not embarrassing either. Can't believe the Habs pulled off that upset, and my hopes for Phoenix almost came to fruition...Boston and Buffalo was a coin toss, with Boston sounding stronger than I thought. Time to update the second-round crystal-ball gazing: I had Washington in the final, but Pittsburgh seems a better bet at this point, with San Jose still taking home the cup.
Posted by Jeremy at 9:56 PM 4 comments: 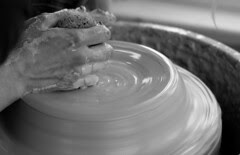 I suppose nearly everyone who checks this space also visits Tannis's blog occasionally, but if not, she's got a great post on our family pottery session on the weekend: Mud Madness.

She was an excellent teacher, and we all started to figure out why she's been so passionate about working with clay. It's so tactile and tangible. Ezra loved the motion and feel of the stuff spinning on the wheel, and the girls even got serviceable bowls out of their efforts. My result was a shapeless, sloppy lump -- it's not easy, but I guess you gotta start somewhere.

Apologies for the terrible title pun. 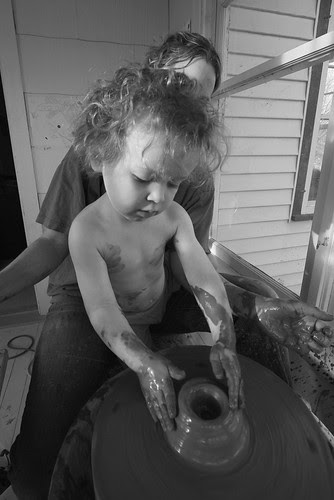