I think we opened the photography show at Red Rooster with reasonable flair. It was fun, and very cool to see so many friends and acquaintances there to show their support for my creative efforts. Downstairs, we staged the string quartet in front of the wine-tasting bar. Upstairs, my mom and dad had set up wonderful snacks, wine was being served, and the pictures covered the walls.

Here's the slideshow of the pictures that made the cut, of course not displayed so nicely as in big frames on the wall, but still better than nothing for those of you who are far away:

I had put way more work into the musical component of the afternoon, so that was the highlight for me. What a thrill to hear my compositions come alive in that space, playing with three wonderful musicians. I felt proud and humbled at the same time. We took simple video and recorded it as best we could, and they actually turned out pretty good. Here's the first song, March:

The rest of the videos, recordings and information about the music are over on my project blog, which I updated accordingly: The Summerland Suite. I was particularly proud of March, May, September and October -- June didn't work as well, and although January is probably my favourite composition, I thought we struggled with it at times. It is the most complex of the bunch.

Jason and Andrew took a bunch of photos of the proceedings, for which I'm so grateful, as I didn't have the time/energy/brainpower to take any for myself. The photos are already helpful as memory triggers, reminding me of little mini-highlights and conversations I had throughout the afternoon.

Special thanks to my parents, who continually support my creativity, helped pay for the printing and generously supplied the delicious food. They both also took the time afterward to tell me how proud they were -- who doesn't want to hear that from their parents (even as a grown-up)? Thanks to them, it was a great party.


Here are a few of the photos that Jason graciously took while I was wandering and shmoozing and making music: 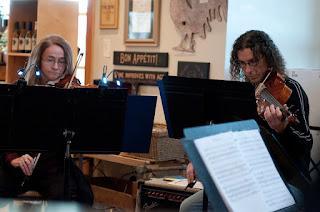 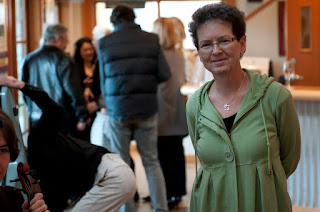 My mom, generous and proud. 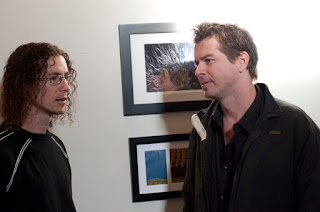 Brothers! A rare shot of me and Ryan. 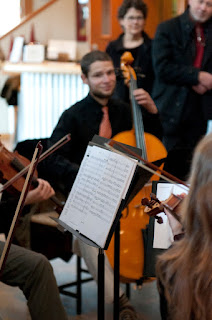 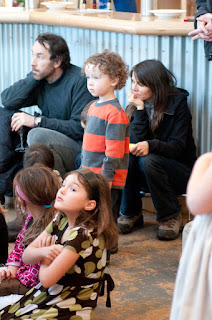 Ez, standing in front of good friends Richard and Liz. 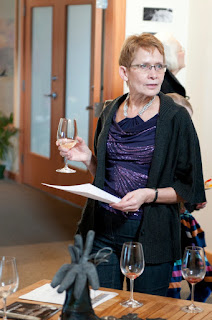 What a treat to have Tannis's mom Pearl visiting! 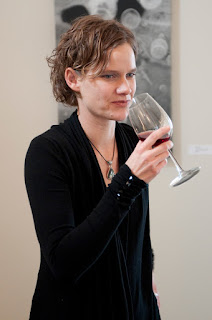 This beautiful woman was so taken by the art that she ended up at my place later.
Posted by Jeremy at 10:43 PM 1 comment:

I haven't been watching much lately in the way of movies or shows. The occasional YouTube videos, I guess. Still been making time for music and reading, of course. As usual, the photos accompanying the writing having no connection other than they're recent pictures I've taken and enjoyed for various reasons.

Reading Marj's obituary in Macleans today reminded me that I've had this post sitting here for a month. The author of that one had the daunting task of trying to encompass an entire life in a few hundred words. I thought Tannis captured some of Marj's spirit recently too, but I haven't been able to write yet. All I've got is scraps of memory of shared experience, a bunch of old e-mails from her over the years, some photos, and the hole left behind.

I've been reluctant to post anything about it because there are so many people who were closer to her, people who are hurting more, and will hurt for longer. Yet we all have our own story. I make no effort to capture who Marj was overall, because I've come to see that I have no idea -- she was connected to hundreds of people in unique, often quiet ways, many of which will never be heard.

What a woman -- larger than life, a force of nature and the master of laughter. An inspiration too, in so many areas of life -- someone who wasn't afraid to buck the trends and forge her own path. She was unconventional, and thank goodness for that. I often said, "man, Marj is such a piece of work!" Always as a term of endearment, of course.

Telling stories about Marj should be easy, yet our dynamic tended to center around Marj telling us stories. How to remember properly when the chief storyteller has left? Aunt Helen used to say that my grandma was the best listener, a good foil for her, laughing and exclaiming at her hilarious accounts of everything. I think we're a clan of listeners, laughers and prompters, often dependent on an intense character like Marj to bounce off of. Not that she didn't listen to our feeble attempts at telling her what was going on with us, but she tended to drive the bus, steering into the areas that interested her most. (As an aside, I love this photo on the right -- Ella took the picture with Marj's camera on a walk near our place).

Everyone who knew Marj knows how much she adored babies, no matter how homely or descended from total strangers. She treated our kids like rock stars, like they were the *most* important people in the universe...well, maybe not like rock stars, considering all the tickling, hanging upside down, crazy shrieking and bags and bags of cute little clothes. It boggles the mind to imagine all of the children she must have poured love into over the years.

And of course they adored all the attention. Then after a visit she'd shower us all with praise. From one of those e-mails:

"I should have known to bring the REAL camera to do any kind of justice to your gorgeous children. Wow. They are really something else. Not just gorgeous, but delightful and most, most precious! What good parents you are! Thanks for your warm welcome and for letting me put that little Ezzie to sleep."

She was the best fan to have, someone who never hesitated to say stuff like: "Know that you are one of my favourite people in the whole wide world!" We could all learn from that example and be better supporters and advocates for the ones we love. Of course later I realized that I was one of her 567 favourite people in the world, but that doesn't diminish the memory one bit.

I'd often ask how her kids were doing, knowing that it would trigger a kaleidoscope of hilarious stories and anecdotes. Her pride always bubbled up, even when one of the kids was in a bad space. Not that she'd candy-coat the dark times; but the love was always reflected. I collected a few things she'd written about them over the years: And it's true, they have all grown up to be remarkable people. She and Jim have given them to tools to be wonderful, and they are. At the end of one of the updates, she summarized:

"So now I have given you the low-down on all the kids. Not sure why, but I am so full of mothering them and need to spill some of my pride and joy out now and again."

Our connection to Marj over the past decade greatly benefited from her work partnership with my mom. It meant that she'd fly out to the Okanagan once or twice a year and we'd usually get to see her between her frequent, frenzied shopping excursions and bits of work. Mom was often in awe of Marj's energy, incomprehensibly busy social schedule and prodigious schmoozing (sales!) skills. And Marj couldn't believe anyone could be as efficient, detail-oriented and productive as Mom -- she'd say "oh, you always make me look SO SMART!" They were excellent buddies, in daily contact for a decade, and doing amazing, valuable work together.

With a lifetime of friendship, growing up not far apart as cousins, they knew how different their personalities were. When the partnership worked best, their divergent skills complemented each other perfectly -- the flamboyant people-person out in the field and the diligent back-office person keeping things organized, productive and on-track. Yet those differences also caused plenty of strain for both of them -- running a company together several provinces apart would be a challenge for any pair -- and unfortunately the last year of their work together was very difficult. It made it hard to be buddies, and I'm so thankful that they were able to rekindle their friendship in the months before Marj's death.

The picture below is a bad scan of one of my favourite photos of Marj, taken on a glorious fall day at the Shack around 1997. I think it was Jim, her and me for most of the time; a whole afternoon of quiet, beauty and warmth. It's good for me to remember that she wasn't all about crazy stories, maniacal laughter and hurrying to the next thing. Maybe that's why I like the photo so much -- it reminds me of the thoughtful, reflective side of her.

I put a bunch of photos of Marj in this set, and not surprisingly, most of them show her with one of our kids. This is one of my favourites, taken when Ezra was still brand-new:

Whenever we'd see each other she'd hug me long and hard -- she remembered that the first hug she gave me after Tom died reminded her so much of his thin frame, and she'd mention it every time. Great hugger, that Marj. I still can't believe she's really gone.

The kids helped me with a project this afternoon. Out with the old.